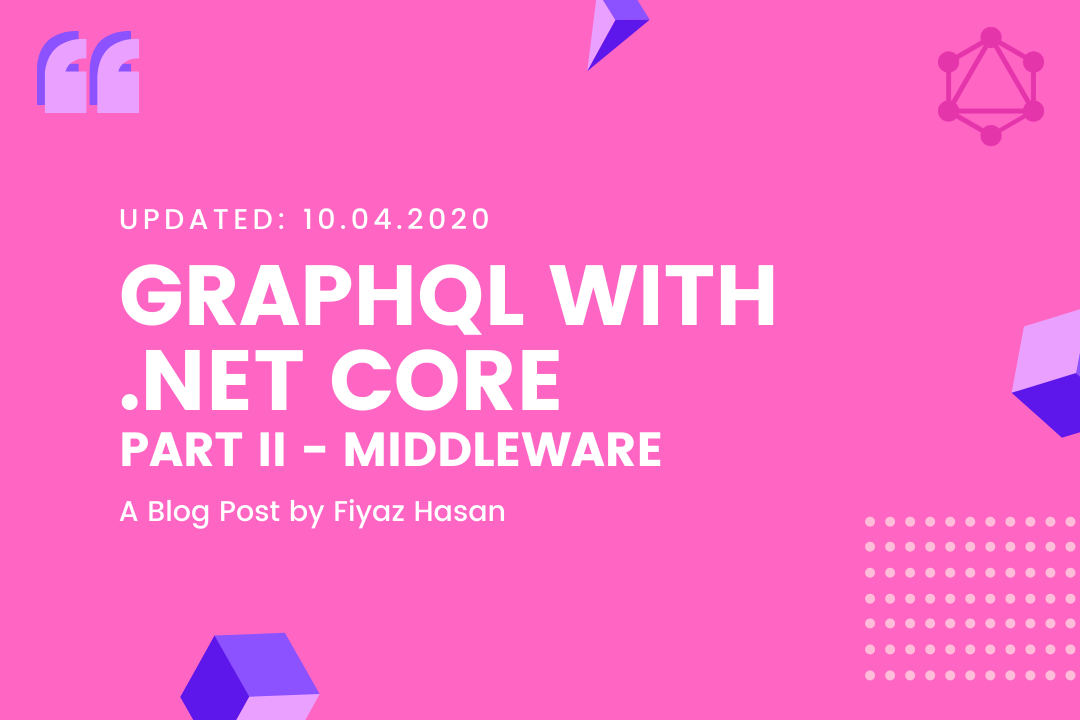 Code samples used in this blog series have been updated to latest version of .NET Core (5.0.4) and GraphQL-Dotnet (4.2.0). Follow this link to get the updated samples.

We will start by creating a blank ASP.Net Core App. Gradually we will create a middleware that can handle GraphQL requests.

If you are familiar with ASP.NET Core middleware, you may have noticed in Startup.cs, that it responses back "Hello World!" on application start-up. Here, UseEndpoints is a middleware that executes an endpoint associated with the current request.

Practically a middleware is a delegate or more precisely; a request delegate. As the name suggests, it handles an incoming request and decides whether or not to delegate it to the next middleware in the pipeline. In our case, we configured a request delegate using the Run() (extension) method of IApplicationBuilder. Between three extension methods (Use, Run, Map), Run() terminates the request for further modifications in the request pipeline.

The code in our console application was very simple and can only respond to a result of a hardcoded static query. However, in a real-world scenario, the query should be dynamic hence we must read it from the incoming request.

It's a rule of thumb that all GraphQL requests (either query/mutation/subscription) should be posted over HTTP POST method. So, we change the MapGet method to MapPost. We also update the endpoint to a more specific one rather than the default root path ("/").

A request body can contain a whole lot of fields, but let's say the passed in query comes within a field named query. So we can parse out the JSON string content of the body into a complex type that contains a Query property,

Every request delegate accepts a HttpContext. If the query is posted over an HTTP request, you can easily read the request body as JSON using the following code and parse it to GraphQLRequest,

We are following the code-first approach for creating a schema. So, we have a Query class as follows,

Finally, we use DocumentExecuter to execute the query. It returns a ExecutionResult. We use the DocumentWriter to write the ExecutionResult to the context response body.

So, after all the modifications, code in the UseEndpoints method of Startup.cs looks as follows,

In Insomnia, you can send structured graphql query like we are used to from our previous console app,

We are pretty much done with this post. But you can see that we have a lot of newing ups of objects like the new DocumentExecuter(), new Schema(), new DocumentWriter(), etc. In the next post, we will see how we can use the built-in dependency system of ASP.NET Core and make them injectable.